When Practicing Drives You Crazy- Five Ways to Keep Going 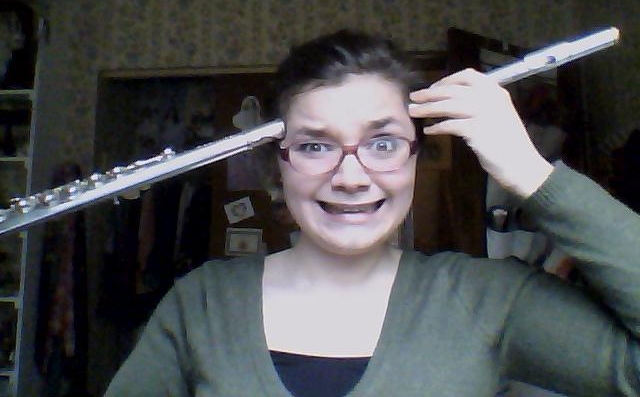 Does practicing ever drive you crazy? Do you ever get annoyed and frustrated with your instrument? Maybe you can’t get something right. Maybe your fingers hurt. Maybe your brain is fried. Maybe your perseverance is at level zero. Hey, I’ve been there. When you just can’t seem to keep going—or just don’t want to—or don’t even see why you should—try these ideas:
1. TAKE A BREAK. The professional music world seems full of stress and pressure; we feel forced to practice for X-billion amount of hours, or we won’t be good enough. Personally, I find this very disheartening. I used to get downright depressed when I looked at the clock and saw that I had three hours and 36 minutes left (out of four hours)—and taking a break was not an option. Because I just simply wasn’t good enough, I couldn’t stop. Well, I was WRONG. Taking a five minute break is not a sin. I repeat: IT IS NOT A SIN. If it’s easier for you to practice in 30-minute chunks and take a 30-minute break between each one, GO FOR IT! No one says you have to go five hours at a time until you fall over.  (That proves nothing but your inability to stand up for five hours straight!) Although it took me a while, I finally found a practice method that works for me: one to two hours before lunch, two more in the afternoon (with a substantial break between each hour) and one to two more after dinner.
2. SLOW DOWN. This is very simple, yet life-saving, advice. If you keep messing the same thing up over and over again, don’t get frustrated! Just play it really slow over and over again. Whenever you play something wrong multiple times, you actually practice playing it wrong. Trust me—it’s very hard to correct something that you’ve been playing wrong for months (#Hue Fantasie, #last Bb-major scale, #DISASTER).
3. FOCUS ON THE GOOD. I have been extremely guilty of tearing myself down with the whole “you stink at this instrument” thing. Let’s face it: as a kid, listening to professional players is daunting. You’re so bad, and they’re so good. But you can’t let yourself think like that! Remember, those guys started out just like you. They practiced for years and years before they mastered their instruments. So, instead of thinking about all the things you can’t do, think about the things you can do. What have you gotten better at since you started playing? We have to know our weak spots so we can fix them, but we should approach them with this attitude: “I can’t do this yet. But each time I work on it a little, I get a little better.”
4. THINK LONG TERM. What are you working toward? What are your goals? If you don’t have any goals for your instrument, you’ll never be able to persevere in practicing. I strongly encourage you to learn your favorite piece, join an ensemble, or sign up for a competition. Once you have music that you have to learn, you’ll have a reason to keep practicing. When you have a goal (such as, “I need to learn this piece before my recital in four weeks”), think toward that goal. If a tricky little note pattern drives you up a wall, remember the big picture: you’re working for something that’s more important than temporary frustration.
5. FIND SOMEONE TO COMMISERATE WITH. (Pick me! Comment below!) This might be the most helpful idea—I’m serious. When practicing drives you crazy, find someone else who is also going insane. The two of you can complain and cry together. I promise: it helps to know that you aren’t the only one struggling.

Nice, balanced view on practicing. Do you really practice 4 hours a day? Wow!

Yes, I do really practice four to five hours a day. (I just as shocked as you are!) :)

Great post, I admire the writing style :) A little off topic here but what theme are you using? Looks pretty cool.

Thanks so much for reading! :)

Bob Wright Creative is our site designer. They came up with the theme and design, and we love it as much as you do. You can check them out here: http://www.bobwrightcreative.com/

I Agree with everything you said in this post. And by the way, I think I was at your house when you were practicing that Bb Major Scale in the end of the Hue Fantasie.

Anyone who's ever visited us within the past year has heard that Bb major scale. :P

Thanks for reading! Come again!

Whoa! This blog looks exactly like my old one! It’s on a completely different subject but it has pretty much the same layout and design. Outstanding choice of colors!

That was really good!