Playing with the Orchestra 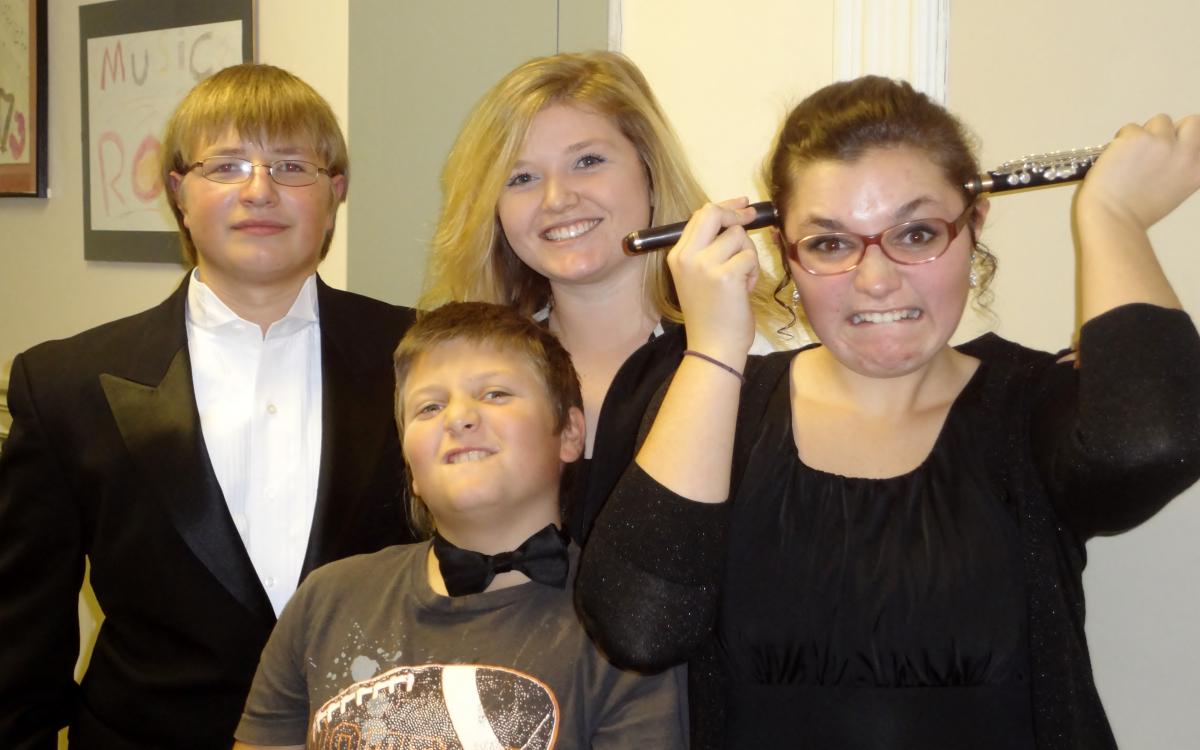 Micah (far left) and his siblings after the concert.

The date was November 11th, 2012. The Hochstein Performance Hall echoed with a cacophony of strings, woodwinds, brass, and percussion. Every instrument was warming up with different clashing notes, scales and excerpts. One audience member described the wall of sound as "messy"; another proclaimed it "chaotic." But to Micah H, a ninth-grade percussionist performing in his first big concert, the hall resounded with anticipation. "I was excited but relaxed," says Micah. "I was looking forward to the music starting." The lights dimmed, and the hall hushed. For ten seconds, the orchestra members sat in silence, waiting.
Applause broke out as the concert mistress walked out on stage, bowed, and took her place. Ten more seconds of silence passed. Suddenly, confident footsteps sounded as the conductor strode out and bowed to the enthusiastic audience. He turned to face the orchestra. He smiled reassuringly. He lifted his baton and held it in the air, looking intensely at the musicians. With a sudden drop of his hands, the music began.
Micah performed his difficult parts flawlessly. He was responsible for bass drum, bells, chimes, cymbals, and triangle. "During the concert, I was concentrating really hard on the parts. The time seemed to go by really fast!" To honor veterans, the orchestra stood up and performed the National Anthem first. The four other works performed - Mozart, Gould, Rossini, and Copeland - differed greatly in style. Mozart was light and precise; Gould was boisterous and heroic; Rossini was stately and elegant; and Copeland was raucous and exciting.  After the final blaring chord of Copeland that ended the program, the audience jumped up in their seats with wild applause. Micah grinned out at the standing crowd. "I was just happy. I didn't mess up, and it was lots of fun."
After the concert, people gathered in the lobby for a light reception. Everyone was talking, laughing, taking pictures, and congratulating each other. Orchestra members' younger siblings inhaled cookies and ginger-ale. Adults commented on how much they loved the performance. The musicians themselves were glowing. They felt blessed by the opportunity to play in such a beautiful hall and by the kind praise they received. "It was just a happy experience," says Micah. "I feel very fortunate to have this opportunity."

Have a great day!. I feel like I’m always looking for interesting things to read about a variety of niches, but I manage to include your blog among my reads every day because you have honest entries that I look forward to. Here’s hoping there’s a lot more great material coming!
バーバリー アウトレット http://www.thbsf.com/